The WebLab is a platform aiming at providing intelligence (business, strategic, military...) solutions and any other applications that need to process multimedia data (text, image, audio and video).

A Layered model of application composition

It is composed of several layers: 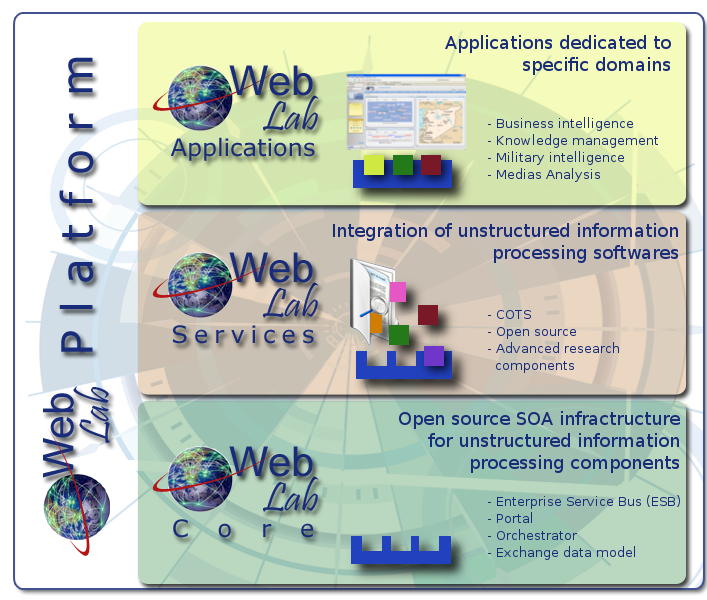 A quick overview of the WebLab Exchange Model

The model defines the common grammar which from a technical point of view will be expressed through XML schema. It describes the structure and parts of content of any data exchanged through the bus such the multiple document types processed in the platform. In order to ease the communication during its collaborative design, the model is formalised with UML because this visual technique is more readable and understandable than XML. The complex XML types are modelled as object classes that will be used in the services WSDL definitions as parameters of operations. When it has been approved by the community, it has to be translated in XML Schema for its technical implementation (it can be done automatically, for example, from an XMI file exported by the modeller).

The semantic Web standards (RDF [4], RDFS/OWL) have been used in order to ensure the sustainability of the model, its compatibility with existing software components involved in the application domain of the WebLab platform, the capability to exploit existing domain ontologies or build with semantic information extraction tools.

A WebLab Resource, generally simply called a Resource, will be defined as any object which has a link with the final user interests or services needs, could be used by a service on the platform and could be identified by an URI.

The resource concept includes all type of entities which should be processed by several services and also any kind of object that could be useful for a service in a specific task: document, segment of document, services configuration files or ontologies, queries, etc.